By Elizabeth Janik April 4, 2022 No Comments 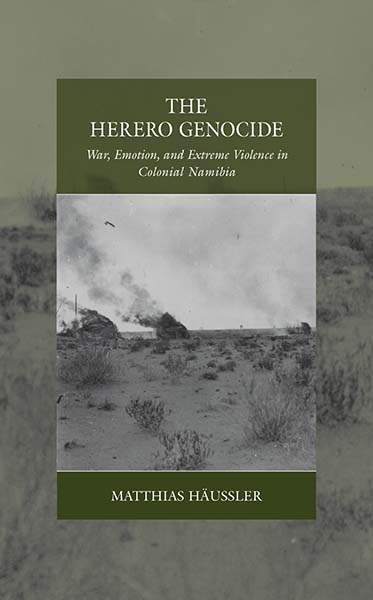 A seemingly historic milestone occurred as my translation of Matthias Häussler’s The Herero Genocide: War, Emotion, and Extreme Violence in Colonial Namibia went to print last spring. More than a century after the fact, the Federal Republic of Germany officially recognized the genocide of the Herero and Nama peoples in what was then the colony of German South-West Africa. (See the reporting in the Guardian and New York Times.) Seeking “a joint path to genuine reconciliation in remembrance of the victims,” foreign minister Heiko Maas announced that Germany would pay Namibia €1.1 billion in development aid (although, significantly, not reparations).

The joint declaration was years in the making. Although Herero and Nama descendants of the survivors considered its terms insufficient, Namibian president Hage Geingob described the declaration as a “first step.” Many observers believed that the Namibian parliament would ultimately approve the mutual agreement, and that German President Frank-Walter Steinmeier would issue a formal apology in Windhoek. Instead, Herero and Nama protests grew louder and the reconciliation process stalled. It remains to be seen if the new German government—now contending with real-time war crimes within Europe—will renegotiate its gesture of atonement for what is sometimes called the first genocide of the twentieth century.

The complex questions surrounding genocide—how to define it, how to prove it occurred, who should be held responsible, and how to make amends—have no easy answers. In translating Häussler’s work, I’ve learned that some aspects of the mass killing in German South-West Africa—including the role of concentration camps, and the extent to which atrocities were premeditated by German elites—don’t correspond as neatly with mid-twentieth century notions of genocide as some observers may first assume.

Häussler tackles all of this complexity head on, closely examining how and why the Germans’ military response to a Herero “uprising” descended into a spiral of violence over the course of 1904. He argues that genocide studies’ traditional focus on proving intent has sometimes obscured the nature of extreme violence as a process. Mass killing did not always occur by top-down command (Lieutenant General Lothar von Trotha’s infamous “firing order” notwithstanding), and it involved unpredictable constellations of many different historical actors.

Perhaps most intriguing for me, Häussler argues that genocide was the result of the failure, rather than the success, of Trotha’s battle plans. If the Germans’ initial goal was to “destroy” the Herero as an independent political entity, their failure to achieve a decisive victory against a supposedly inferior opponent was unexpectedly devastating. (The various and evolving meanings of Vernichtung are particularly important in this context.) Trotha and his soldiers responded with shame and rage. A new kind of brutalization took hold after the disappointing Battle of Waterberg in August 1904. German forces pursued the Herero eastward into the Omaheke desert, where thousands died of thirst or exhaustion, if not by bullets, as “Trotha sought to extinguish the traces of his own military failure alongside the Herero themselves.”

The Herero Genocide is a difficult but important book. Unfortunately, genocide is a subject that has lost none of its relevance in the world today.