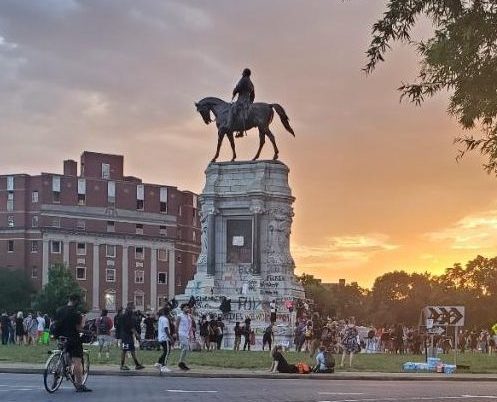 June 2020: As I was finishing my translation of Matthias Häussler’s study of the Herero Genocide in German South-West Africa (forthcoming from Berghahn Books), protests sparked by the needless deaths of George Floyd, Ahmaud Arbery, Breonna Taylor, and so many other black Americans swept the United States. Pent-up outrage at the pervasive racism in my country spilled onto the streets and took aim at an obvious target: monuments that celebrate Confederate leaders and soldiers who fought on behalf of a system of racialized slavery.

These events have been transformative for all Americans—even, or perhaps especially, for privileged whites like myself. I’m a comparatively recent transplant to the American South. The two cities that I’ve called home in the Hampton Roads region, Norfolk and Portsmouth, have (had) monuments to their Confederate war dead in prominent downtown locations for more than a century.

Translating The Herero Genocide, it was hard not to notice that the years of Germany’s bloody colonial wars in South-West Africa (1904–07) were also the height of the Jim Crow era in the American South. There are, of course, many important differences between these two settings. But surely one feature they share is powerholders’ disregard for black lives and a belief that the same rights and laws did not apply equally to people with different skin colors. The Confederate monument in my adopted hometown of Norfolk was erected in 1907.

Three years ago, following the white supremacist rally that turned violent in nearby Charlottesville, Norfolk City Council voted to take down its monument—but a state law blocked Norfolk and all other Virginia localities from actually doing so. Around one year ago I started working with activists in Norfolk, Charlottesville, and elsewhere around the state to repeal this law. This spring, the necessary legislation finally passed both houses of the Virginia General Assembly and was signed into law by the governor.

The law was to take effect on July 1—and then history intervened. Confederate monuments again became a focal point for angry protestors, but this time local authorities lost their enthusiasm for cleaning up the graffiti. In Portsmouth, where the City Council had not yet voted to take down its monument, one man was seriously injured as a crowd ripped the statues apart. The status quo for Confederate monuments in Virginia changed almost overnight. Norfolk’s mayor announced that, in the interest of public safety, the city would begin dismantling its monument as soon as possible. Governor Ralph Northam and Richmond Mayor Levar Stoney had already signaled their intent to remove the towering figures of Robert E. Lee and other Confederates from the capital city’s Monument Avenue—a step that few observers, including myself, had thought possible even days before.

Taking down the Confederate monuments is an important, and long overdue, step for Virginia. There’s a lot we can learn from Germans’ experience in coming to terms with the painful aspects of their history, and acknowledging and memorializing past injustices. I’ve written about this in my local newspaper.

Here are authors I’ve learned from (and I’ll keep updating the list occasionally):

Marc Fisher, “Why those Confederate soldier statues look at lot like their Union counterparts” (The Washington Post, 8/8/17): A useful reminder that many of the monuments under discussion were not one-of-a-kind works of art.

James Comey, “Take down the Confederate statues now” (The Washington Post, 2/7/19): OK, I know, it’s James Comey, I have mixed feelings about him, too. But this is the op-ed I read that encouraged me to stop thinking about the monuments and actually do something about them.

Kevin M. Levin, “Richmond’s Confederate Monuments Were Used to Sell a Segregated Neighborhood” (The Atlantic, 6/11/20): The title says it all.

Eugene Robinson, “There is no earthly reason this nation should be defiled by Confederate statues” (The Washington Post, 6/22/20): He sums it up well.

“Ken Burns: Our monuments are representations of myth, not fact” (The Washington Post, 6/23/20): James Baldwin is the star of this short video narrated by Ken Burns.

Holland Cotter, “We Don’t Have to Like Them. We Just Need to Understand Them” (The New York Times, 6/24/20): A important reminder that monuments can’t always be neatly categorized.

Daniela Blei, “The Museum Where Racist and Oppressive Statues Go to Die” (Atlas Obscura, 8/14/20): A nice overview of the “Unveiled: Berlin and Its Monuments” exhibition at the Spandau Citadel